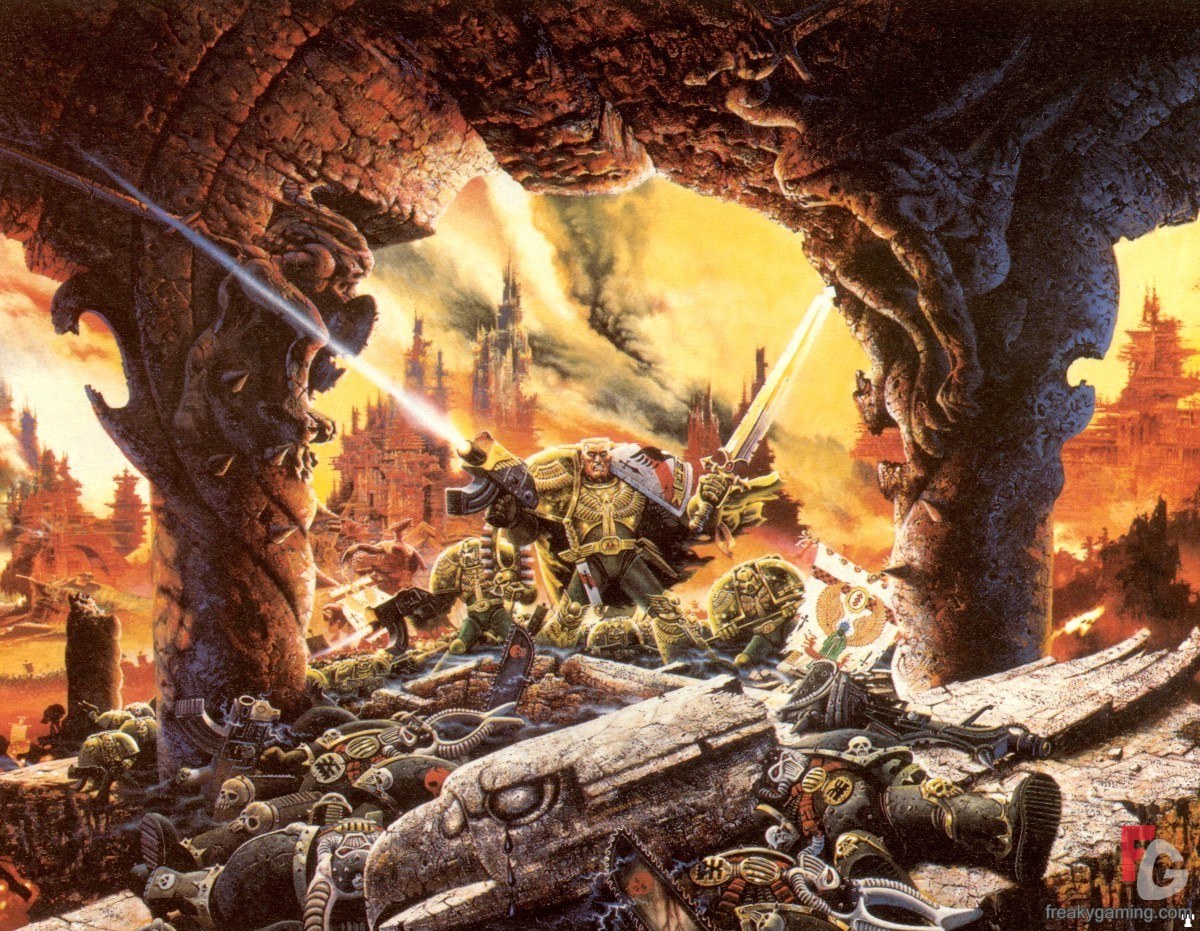 Alright, let’s do this.

“In the grim darkness of the far future… there is only war.” (And fan service)

Games Workshop has just announced that a Warhammer 40,000 TV is in the works.

This is not a report on all the details. Plenty of other sites have covered this. This is a rambling article about storytelling.

I am also setting aside all discussions of “Does this need to exist?” We have the industry we have, not the one we want.

The project is in development by Big Light Productions and being run by Frank Spotnitz, The Man from High Castle, The X-Files, Medici: The Magnificent Medici, and Emily Feller of Trust Me.

They are adapting the Eisenhorn Series by Dan Abnett. This is a really good place to start. Dan Abnett is also a genuinely talented and hardworking creator. Horus Rising is a genuinely great piece of dark Science-Fiction.

So, if I were to meet the showrunners, here is what I would say.

First, the hard truth that every 40k fan must learn. No one cares about the lore. No one.

Every 40k fan forgets. Warhammer does not exist to tell a compelling story, it exists as an interesting and brutal place to play a war game. Everything from the previous sixty years of science fiction has been thrown into a blender and given a Grimdark coat of paint.

It exists to create stories, NOT a story to be told.

You know why those Astartes fan films are so amazing? They remember that it is dark science fiction with its origins in the pulp-paperbacks of the 1980s and wargaming. They reduce it down to its base elements. Its Rogue Trader roots.

So less lore and even less exposition.

This show should never have, “Oh this is a demon of Nurgle blah blah Heretic!” The audience should be screaming when they see a deamon for the first time. “OH GOD WHAT IS THAT? HOW COULD ANYONE PUT THAT ON TV?!”

Then a character we like is almost killed by it and does something awesome and kills it first.

This needs to be filmed like a cross between a horror story and a crime procedural in order to balance the tone and story.

That is how you tell this pulpy Grimdark stuff. That’s what the vast majority of Black Library’s catalogue is. It’s pulp. It does not exist to tell compelling stories (those will sneak in) but to give you more and more awesome tropes. That’s what a lot of 40k is… tropes.

This show should, from moment one, require zero explanation to anyone. We should not learn a thing about the Imperium, its history, or how it works. We live in a shitty far flung future where there is the Imperium. That’s it. We should not worry about the Space Marine Legions, the Emperor or the Horus Heresy.

To the rest of the world, this is another dark science fiction show. The priority needs to be on characters and story.

People will see this show and go “Oh hey, that looks really cool.” Then become invested in the characters. THEN you add the weird stuff.

A series about an Imperial Inquisitor is a fantastic place to start. It allows for lots of different stories, allows a wider cast than most 40k fans aren’t even familiar with. Grimdark Firefly?

People could get into an anti-hero like that. With a wider cast of characters around the inquisitor, we can have interesting dynamics to explore. Which leads me too…

Diversity! Oh, a dirty word amongst many basement dwelling troglodytes, but I don’t really care.

The fact that this is an adaption of another niche property of another corner of the nerd-culture hegemon is… as I said… Hollywood we have, not the Hollywood we want. This is a game played by largely white, well-off, mostly male fan base (though that is changing). One of my closest peers uses the hobby in Corrections for at-risk youth.

This show needs diversity both on screen and in the writer’s room. 40k has survived primarily because it is so niche, so no one cares. If this wants to do well, it needs to embrace the realities of modern story-telling.

Where are my Salamanders? Where are my Sisters of Battle? Have the courage to cast widely and in unexpected ways. Do something right here. Ultramarines are Roman-themed, the Romans were multi-ethnic.

I love its characters, its world and its lore. I have a cabinet full of my own chapter of Space Marines. I spent all of high-school going there because I didn’t really have anywhere else to go.

Warhammer means as much to me as Star Wars or Lord of the Rings. As much as any fictional property can.

But as a storyteller, I know where the fissures in this property lie and why we need to be real with how we adapt something like this. I want this to be good. When the showrunner says there is “Nothing like this”

Yeah, there really is nothing like this. So don’t fuck it up.

I hope they do well and people like it. Then I can show people my miniatures and only be slightly less embarrassed.

Finished two more sagas. One set in the 5th century and featuring guest appearances from Beowulf, sorcereress and berserkers. The other set in the 11th century with the climatic battles at hastings and stamford bridge.
2022 was probably the hardest year of my life. I quit a job, lived in Iceland, wrote another book (maybe two?), started a few new jobs, climbed mountains, got Covid, moved out, touched places where vikings walked, learned to drive, took a comic making class, made friends, lost friends, tabled at my first convention, wrote some more, then sprained my ankle.
Good book for those already interested in the topic. Some chapters tend to drag but it depends on what specific details you are interested.
Remember when I used to post books on here? Yeah neither do I.
2nd Day at Fanquest!! Come visit me! Come get your dark fantasy fix!
… so it begins